The LEAP methodology is an especially powerful tool for detailed transition planning. By visualizing one's...

Do you have a Dream without a plan?

Do you know where your organization's going?

Take LEAP | Get Certified as a LEAP Coach

TAP Training Associates Pacific is a human resource development organization registered in the U.S. with offices and a learning center on the Olympic Peninsula near Seattle. TAP associates form a global network of professionals who advise on, design, and facilitate state-of-the-art participatory learning events, customized courses, and training materials (manuals, guides, procedures, handbooks) in the United States, Africa, Asia, the Pacific, and Europe.

Posted by Marcia Hamilton on Tuesday, 21 April 2015 in LEAP Planning 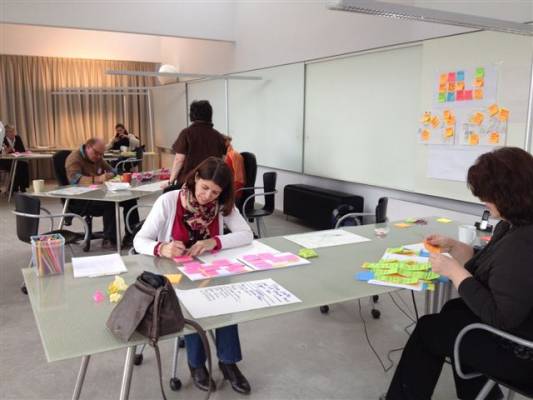 Ghent, Belgium.  April 11-12.  Eight people with at least three things in common.  They had all recently completed a Yoga Teacher Training Course conducted by Yogalife (check it out at www.yogalife.com).  The last couple of days of their course had featured the founder of Yogalife, Sanjeev Bhanot, our friend and increasingly famous yoga guru.  More famous now, because he is the Yoga Trainer for the pilots of the Solar Impulse, now attempting to fly around the world on solar power.  All of our clients had that warm healthy glow about them that comes with regular yoga and healthy food.  And, they had all joined a LEAP Personal Planning Workshop that Marcia and I were facilitating.

For those who may not be familiar with LEAP, it is an acronym for Life Experience Action Planning, a planning process designed to help individuals, couples, groups and companies in some kind of transition move with purpose toward a future they choose.

Not long after we started participants were sharing their analyses of recent personal achievements and then, were creating and sharing with a partner, pictures of their present situations and of the future they envision in two to five years. The pictures were a step to identifying the circumstances that were standing between each person’s present and their desired future.

The problems and obstacles served as the source of personal project objectives, which were developed before the end of the afternoon. Then, with some serious thought and a bit of guidance each participant created an objective tree with a project purpose, several main objectives and priority objectives.

End of day one.  Start of day two. We began with a presentation of the objective trees.  Each was presented by its creator and posted on a long wall for all to see.

Then came the last main step.  We introduced the personal planning chart, explained each column and gave examples of how to do indicators.  Marcia and I moved from table to table asking a few questions, answering a few others.  Preparing objectives for which a reasonable means of measuring progress can be developed is sometimes challenging and these folks all rose to the challenge.

End of the day.  End of the workshop.  Well-deserved certificates distributed.  Planning documents collected and carefully rolled or folded for the journey home.  Smiles all around…hugs, too.  We have done many of these workshops.  This one was special.

Marcia Hamilton has not set their biography yet